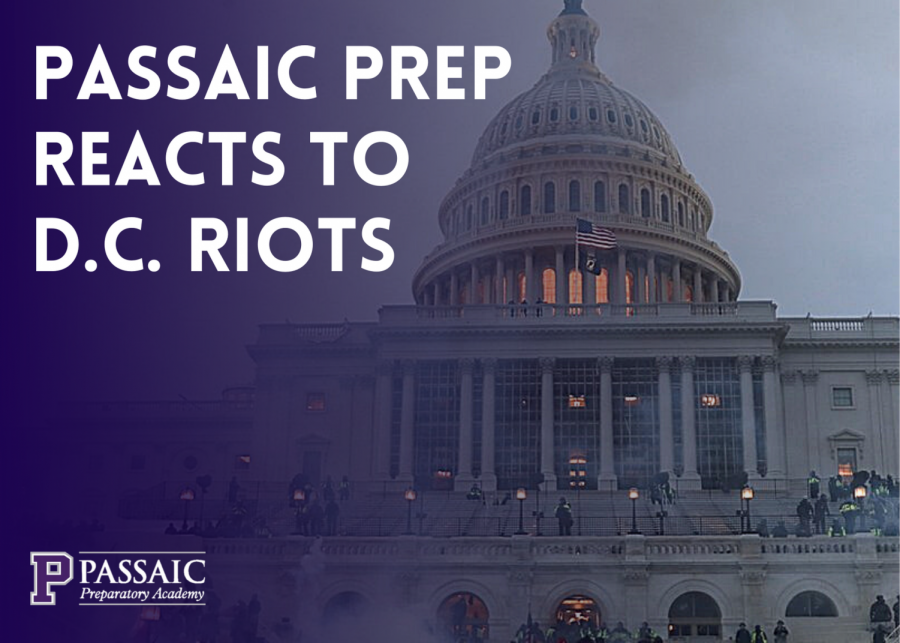 By The Boulevard, Editorial Staff

Supporters of President Donald Trump stormed the U.S. Capitol building on Jan. 6 in an attempt to stop Congress’s certification of the electoral college votes as Congress confirmed that Joe Biden would be our next president.

Despite a lack of evidence, Trump supporters believe the 2020 presidential election was rigged in favor of Biden. After the suppression of the riots, Congress confirmed Biden’s win.

The Boulevard reached out to Prep students and staff to share their thoughts on the D.C. riots. Here’s what we had to say; HOVER OVER A BLACK BOX TO READ THE COMMENT, and click it for more! To add YOUR thoughts, email your name, class and quote to Mr. Schmerler at [email protected]

"All those involved -- from the top down -- should be prosecuted to the fullest extent of the law. This was not an act of patriotism -- and none of those who took part are patriots. Officer Eugene Goodman is a patriot. Rep. Adam Kinzinger is a patriot for speaking out. This was an act of fascism and terrorism and should be treated as such."

“We are currently living in an unprecedented moment in U.S. history where an insurrection/attack on the United States Capitol building was backed and supported by the acting president. We have been attacked before, the Capitol has been attacked before, but this is different because of the President's involvement. Sadly, when asked to call off his base, he waited several hours to do so and that resulte...

“I could not believe what I was seeing on TV. It looked like something that came out of a movie. I just remember feeling anger. How did these terrorists make it that far and into the Capitol, a symbol of our democracy? Why were they not being pushed, maced, beaten like the peaceful protesters have been during the Black Lives Matter protests?”

“In my eyes, Washington, D.C. has always been a city full of opportunities and hope.  Every time I have gone, I have always left feeling empowered and hopeful for the future. What happened on Jan. 6 was terrifying to say the least, but I want all of us young people to look at the event in a certain light. We are the future of this county, and if we want anything to change, we are the ones that wi...

“Honestly, it’s quite terrifying knowing that these events are taking place in this time period. One would think that America would be moving forward and growing as a nation nurturing our thoughts for the better. Instead it seems like we’re going backwards in time, it upsets me because when the Black Lives Matter movement was occurring there was so much controversy around it and negativity was sp...

“I’m genuinely upset at how government officials settle the riots. The fact that these people went inside the capitol. They have no sense of respect. Some of these riots decided that it was okay to sit in Nancy Pelosi's office and put their feet on top of her desk is disgusting. I’m upset at how the police officers handle it. They didn’t use violence against them. Just a few months ago dur...

“My thoughts on the D.C. riots is that all of that was just awful and it shows how messed up this country is. The police decided to act more protected in the BLM protest than the riot that was clearly happening in the capitol. These Trump supporters had guns carried with them and the police let them in, the police took pictures with them and Trump just allowed all of this to happen. I feel like ...

“It was an insurrection, an attack against American Democracy. Due to the way Trump egged on the rioters, he should be impeached again.”

“When I logged onto Twitter, I remember seeing a headline of the D.C. riots and brushing it off as another pro-Trump protest. I didn’t know the extent of it and when I saw videos of them storming into the Capitol, chanting and harassing, I was honestly scared. I was scared because my mind associated the riot and the people partaking in the riot as Nazi loyalists. Some may say it’s a bit of a ...

“I think that Trump's supporters had every right to express their discontent vocally. That is protected by the First Amendment. However, once they became violent and breached the walls of the Capitol, they were no longer in the right. I think it is incredibly shameful for a president, despite his or her political beliefs, to incite violence of any kind. That is inappropriate and should not be tolerated. As...

“My opinion on it was unbelievable, honestly, seeing all the pictures and images all over the news just really didn't seem real. Those people in the riot knew what they were doing and should be held accountable for it. This is sad that this happened all over Donald Trump losing the election and people couldn’t deal with it.”

“I think it’s reasonable and justified for people of color to feel outraged about the D.C. riots. While BLM peaceful protests were met with unwarranted violence, these D.C. rioters basically met no resistance. I believe it goes to show the privilege they have. They get to waltz into the Capitol without being hit by rubber bullets or tear gas, but when minorities protest, they’re hit with tho...

“I think it’s absolutely disgusting, and the fact that the country has gotten to this point is both appalling and terrifying. We have just witnessed the hatred and privilege that has been building up for four years. I hope that people who are to blame are held responsible, but this system has proven and will continue to prove that those in power never truly face the consequences of their actio...

“It’s selfish, it was so ignorant of those people to storm the Capitol. A place so important and is a sacred piece of our country's history. It's funny because the same people that preach to our fellow citizens to stay patriotic, they break in and walk around with the confederate flag. It makes me so mad that our country can be so divided when at these times we have to be most the united. It anger...

“Honestly, I feel upset about the D.C. riots. I am mainly upset with the fact that there American citizens that are fighting against the peaceful transfer of power that has always been a defining factor of America. The Election of 1800, without any bloodshed, Jefferson, Democratic Republican, was able to peacefully rise to power even though his ideologies were completely different than the previous pre...

“The riots that occurred on January 6th will surely never be forgotten. Americans have a right to protest, but the way it was hosted and handled is quite embarrassing, to say the least. Donald Trump, as an ex-President of the U.S and a powerful politician, could have used his platform in a more effective and careful manner to soothe his followers after the results of the 2020 election were revea...

“I'm not exactly sure how to express how I felt about what went on. I think that they let this many people storm a Capitol building with barely any consequences. It’s seen that in some videos many were just let in and this was considered a "protest." They caused all this because the person they worship lost the election. If we put it in terms of the BLM movement or LGBTQ+ members fighting for ...

“What happened at the Capitol Building in Washington, D.C. last week is a stark reminder of how polarized our country has become and the radical measures some will go to in order to achieve their political goals. If we as a nation cannot unite in peace and a willingness to grow, then the disturbing behavior that has been on display will unfortunately occur more often.”  ...