Antigone: A Sacrifice for Change? 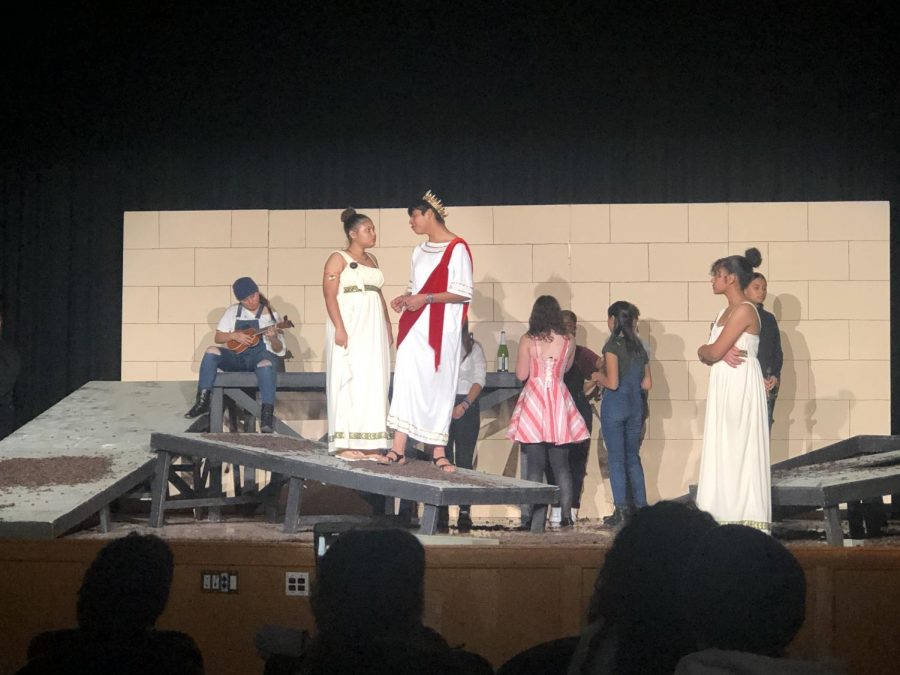 Passaic Prep put on an adaptation of the Greek tragedy "Antigone."

“What if I bury him?” questions the young and brave Antigone to her uncle, King Creon.

This year’s play at Passaic Prep, “Antigone,” was an adaptation of Sophocles’ “Antigone.” After a prolonged war, the once peace-drained land of Thebes has risen under new rule, casting out the Old Law of the Old Gods following the departure of the former King Oedipus.

Since then, the royal family has been under tensional animosity. In the quotation “What if I bury him?” Antigone refers to her older brother, Polyneices, who was killed by her other brother, Eteocles. Although Polyneices is considered a traitor for going against his uncle and brother for a seat on the throne, Antigone feels it is not just to have his dead body rot on the street for all the citizens of Thebes to view. Persuaded by her fiance, Haemon, and sister, Ismene, to stand down from trying to take her brother from his current (and unlawful by Antigone’s standards) resting place, Antigone contemplates her decision. Will she give up something grave to render respect to someone she loves, against the set decree?

The Boulevard was given the chance to interview the author of the adaptation, some of the cast members and directors of the production. Playing the titular role of the play, Lixangelys Ruiz said, “I’m excited for the play Antigone.” She made a connection to her studies from junior year, saying, “It’s great that we’re doing this play because we studied and read Oedipus Rex in our AP English Literature and Composition class.

“By participating in the play, I’m able to make connections between both texts. It has been a fun and educational experience.”

Playing the part of one of the Chorus members in the play, Angela Aviles had some touching words to say about performing.

“Participating in this year’s production makes me feel like this is what I want to do with my life,” Angela said. “I want to make a living out of acting. During this process of learning, it can be very serious but also fun. I realized that acting can be an outlet to many people in different ways and they can help others get through tough times.

“An impact I want to make on other incoming actors is that it’s okay to be different, don’t let your shyness overcome something you want to try or want to do.”

Britney Mendez Corona is a freshman at Prep and was a part of the ensemble in “Antigone.”

“I feel proud of myself for being part of this year’s production since it’s a new experience and something new to me, she said. “Being part of the ensemble, it has become a learning ground to the path of becoming a great actor.

“What I have realized and learned in this process is that it’s really fun, mostly when you socialize with the other members of the play and have fun during the process. For incoming actors, and for those choosing to have a career in the theatre world, you should do you. … If you have a major passion for it, the main point is to do you.”

Ezra Brain, a professional playwright who adapted “Antigone” for Passaic Prep, stopped by and was able to see the progress of the production. During a break, an impromptu Q&A was sprung. The cast was able to have an insight into the playwright profession, Broadway, and Mr. Brain’s process of adapting “Antigone.”

Before leaving, Mr. Brain was able to see a snippet of the play, and said in utter amazement, “It’s incredible! I was blown away, really, by all the work the actors were doing. Really, really incredible!”

Students from both Passaic Prep and the Passaic Academy of Science & Engineering made grand efforts to make it to rehearsals on time, when called, and even on Saturday mornings. After long school days or just a bit after the break of dawn, they made their way to structure and rehearse their scenes, for an unforgettable and exceptional performance.

The Boulevard: Good Afternoon Mr. Anderson! Thank you for taking time out for this interview.

Mr. Anderson: Of course! Thank you. Alright, let’s do it.

The Boulevard: Expand on the theme of female empowerment for this year.

Mr. A: Yeah, so when we were picking shows this year, we noticed that the population of Passaic Preparatory Academy was largely female. And not only that, almost every theater program in America is heavily female. So last year we picked two shows. … I picked “The Outsiders” because I loved it and it was the show I did senior year in high school, even though the script had a lot to be desired, we still kinda decided to go with that as a story people knew.

And then “Little Shop of Horrors,” we picked because it’s an easier show to do without a large cast, so even if we didn’t have a large turnout, we could … do it with a smaller cast. It can be done with as little as seven I believe, but we were fortunate to do it with about 45, 50.

And so this year we looked at how we could service our students and “Antigone” is one of my favorite plays so that was an easy choice. It features a strong female protagonist; one of the first plays ever written that really featured a strong female protagonist. And we went with “Legally Blonde,” all about a woman who’s using her own brain , her own mind to get and find success. Elle Woods is a wonderfully written character. There’s a couple themes in there I don’t like. I still think it’s a little pandering to the fact that her whole life goal revolves around a man and unfortunately since most theatre is written by men, it’s hard to find a story that doesn’t do that. But that was really the goal; the future is female and how can we service these students who don’t have these advantages that many of their male counterparts may have.

TB: How do you feel from a director’s standpoint, directing the play “Antigone?”

Mr. A: When I direct a play versus a musical, I’ll read it somewhere between seven and 12 times before I actually do it. The first couple of times, I just read it for pleasure. The second, third, fourth time I really start to get an idea of who the characters are. The other times I’ll start to block it in my head, like this is where I imagine people are standing, this is the story I’m telling. I just jot down ideas.When I read “Antigone” the first time, I really wanted to do it in traditional Greek theatre, but as time went on I’m like, “Ooh, let’s set it in the graveyard. Let’s have the chorus speak some lines in Spanish.” There’s just a lot of ideas that come together. I would say I typically go in with 40 weird ideas and we end up somewhere between 5-10 of those coming to fruition.

TB: How do you feel about the future of the Passaic Preparatory Theatre Pathway?

Mr. A: I’m very excited. You know this is our first year in Musical Theatre and it’s astounding how independent the students are. Like if  I’m absent, I can expect them to still do their work. I’m really excited for next year, when we move onto Stage and Screen because then, in my perfect world, we can start directing and creating plays to take to competitions. That would be a good time to do it as well as getting students to write and direct their own one-act.

So, my goal is really to get students to create work that represents them. I really want to create theatre devisers and theatre writers and artists who can tell their story. I mean we look at the writers, they’re predominantly men, they’re predominantly white, so teaching in a community where that is not the case, how can I help service these students to become the writers so they can write parts for people who look like them? Which I’m so pumped for next year!

TB: Thank you and thank you for your time!

“Antigone” had three shows and ran Nov. 15-17 at the Passaic Preparatory Auditorium.