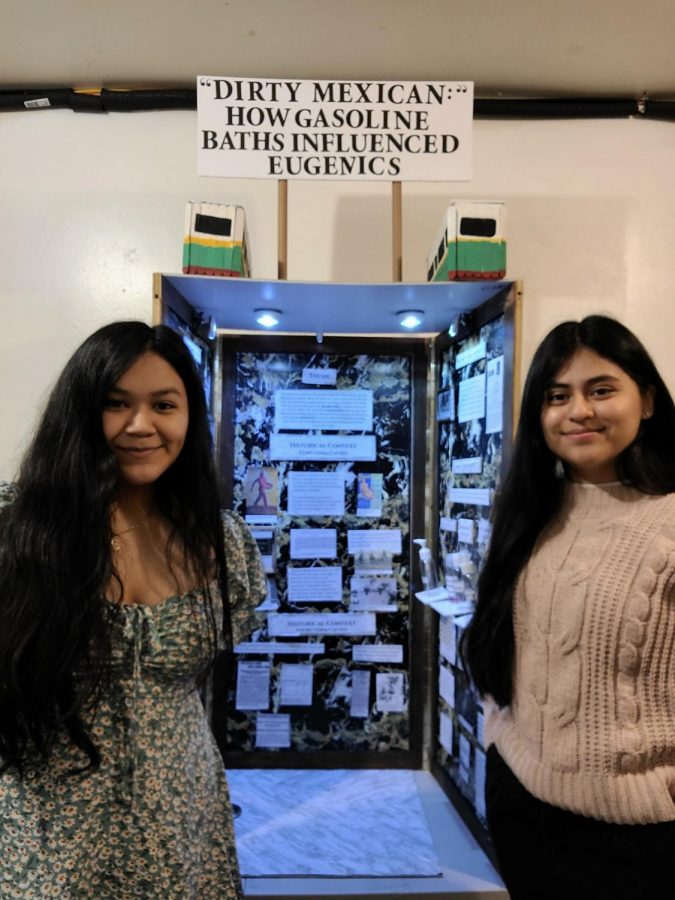 Prep seniors Melissa Reyes, left, and Michelle Carpinteyro pose with the National History Day display that earned them a spot in the next round.

Carpinteyro and Reyes were honored in a virtual awards ceremony on March 13 at Monmouth University. The group competed against exhibits made by students in Hudson, Monmouth, Ocean, and Passaic counties.

Their exhibit, “‘Dirty Mexican:’ How Gasoline Baths Influenced Eugenics,” is a project that analyzes the treatment of Mexicans at the Southern Border. From 1915 to the late 1960s, Mexicans were subjected to gasoline baths and were bathed in gasoline, kerosene, and DDT. After, they were sprayed with Zyklon B on their clothing. Michelle and Melissa explore the information and argue that this practice actually inspired Nazi scientists to use Zyklon B in gas chambers to kill people during the Holocaust.

Ms. Kirsten Huze, the NHD advisor at Prep, told The Boulevard Online: “I am so proud of them both. As seniors, this is their last chance to participate and they did not disappoint! They returned to their original category after creating a documentary last year.”

Melissa told The Boulevard Online, “It feels so amazing to be moving on to the state competition! Michelle and I have been competing since we were in 8th grade. This is the third time we have qualified for the state competition and it still feels so unreal. We are so excited to represent Passaic Preparatory Academy and are so thankful to have Ms. Huze as an advisor to support us throughout these years.”

“It feels incredible to be a senior and move on to the NHD State competition,” Michelle said. “Melissa and I have been NHD members since the 8th grade and to end this journey with my best friend is the best! Ms. Huze has been our advisor from the beginning and her dedication to this program is what kept me coming back. I look forward to competing in the state competition at William Paterson University and excited to see how we advance with our research!”

The duo will virtually compete in the state competition on May 1 at William Paterson University.